I’ve created hundreds of wallpapers over the years, but one in particular has proven to be the most popular. I’m talking about my “Fluorescence” glowing mushrooms. I imagine the greater part of their popularity is due to the fact that they bring to mind psychedelic mushrooms (though those were not the original inspiration). For my part I have enjoyed rendering them as a way to try out new techniques.

Here is the history… that takes things up to the present day. By the way I apologize that the image is called “Fluorescence” but the mushrooms are obviously bio-luminescent.Who can say where it will go from here, but I would like to model some new mushrooms someday… 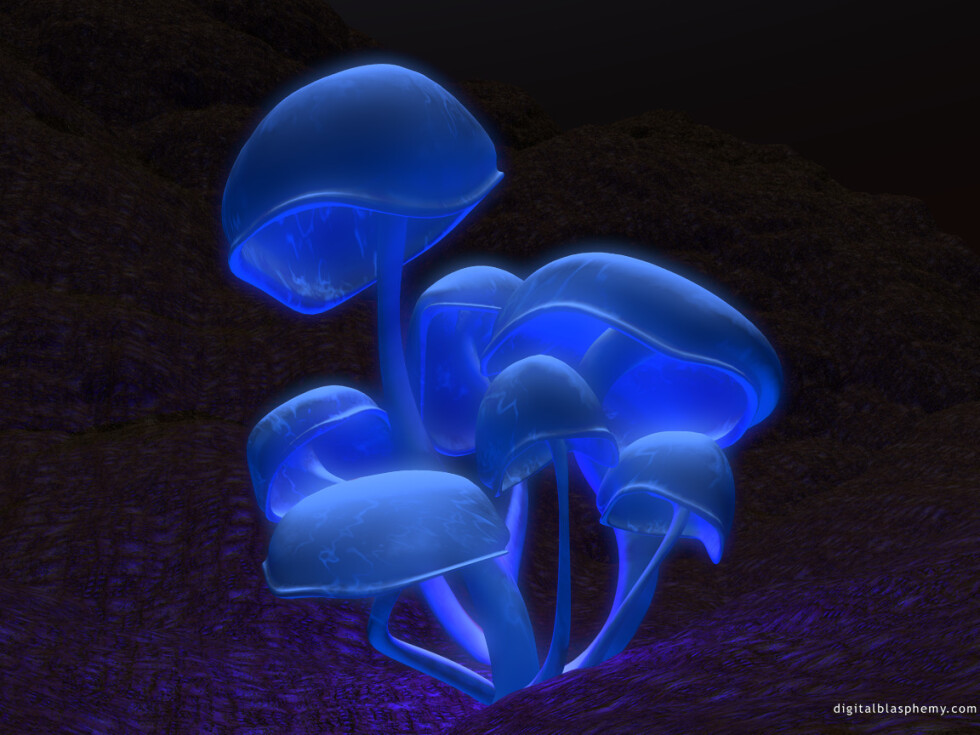 This was my first crack at what was to become my iconic blue
mushrooms. I modeled these using Lightwave 5 as an exercise
with the lathe tool, then exported them into Bryce for this
render (I was still big into Bryce at the time).

By the time Lightwave 6 had come out, I was more comfortable
rendering scenes in Lightwave itself and I did a new version of
the mushrooms. Perhaps
you’ve seen it… 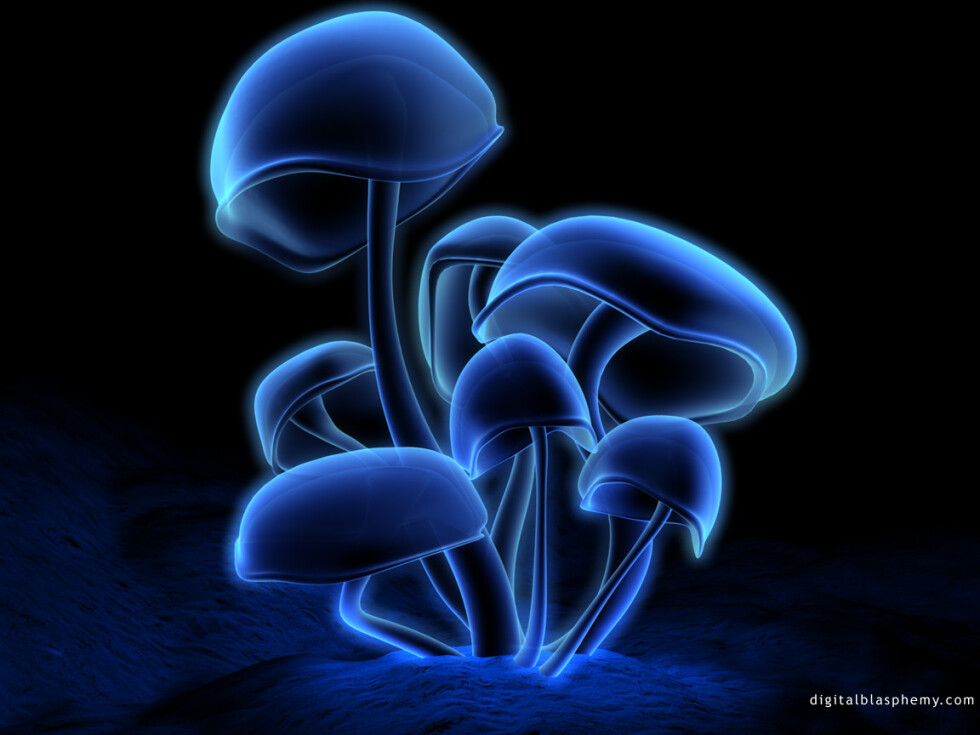 Probably my most famous piece. I initially created the mushrooms
using Inspire3D (an introductory version of Lightwave) and did a render using Bryce. When I purchased
Lightwave 6 I did a second render using only Lightwave and this is
the result. It was really just meant to be an exercise in using
gradients to control luminosity and transparency ending up becoming
an icon. Funny world! 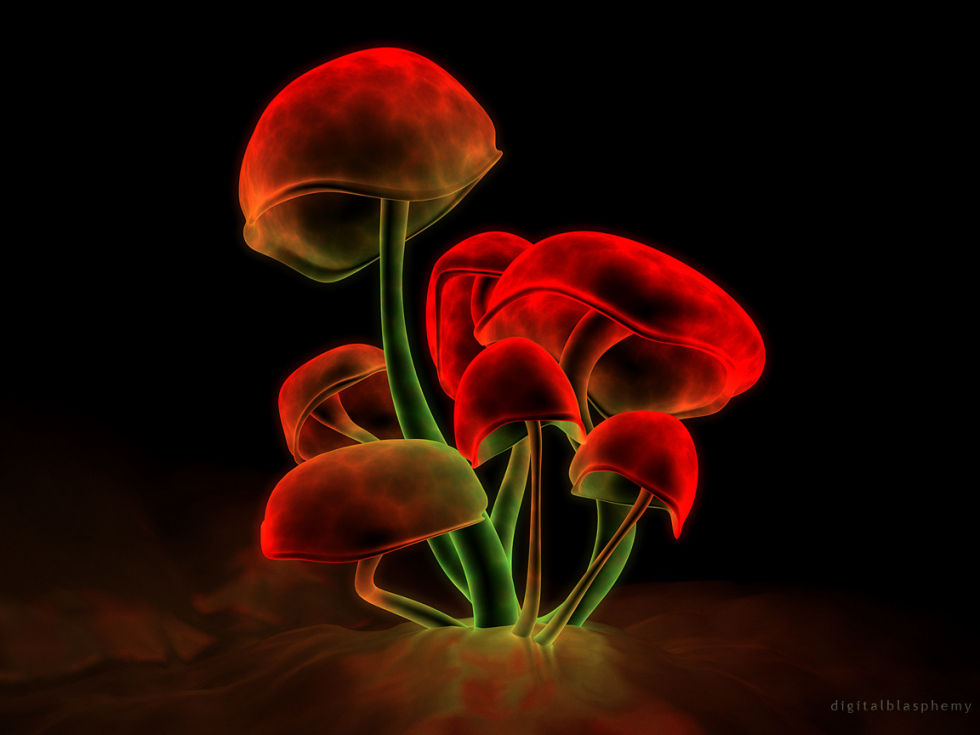 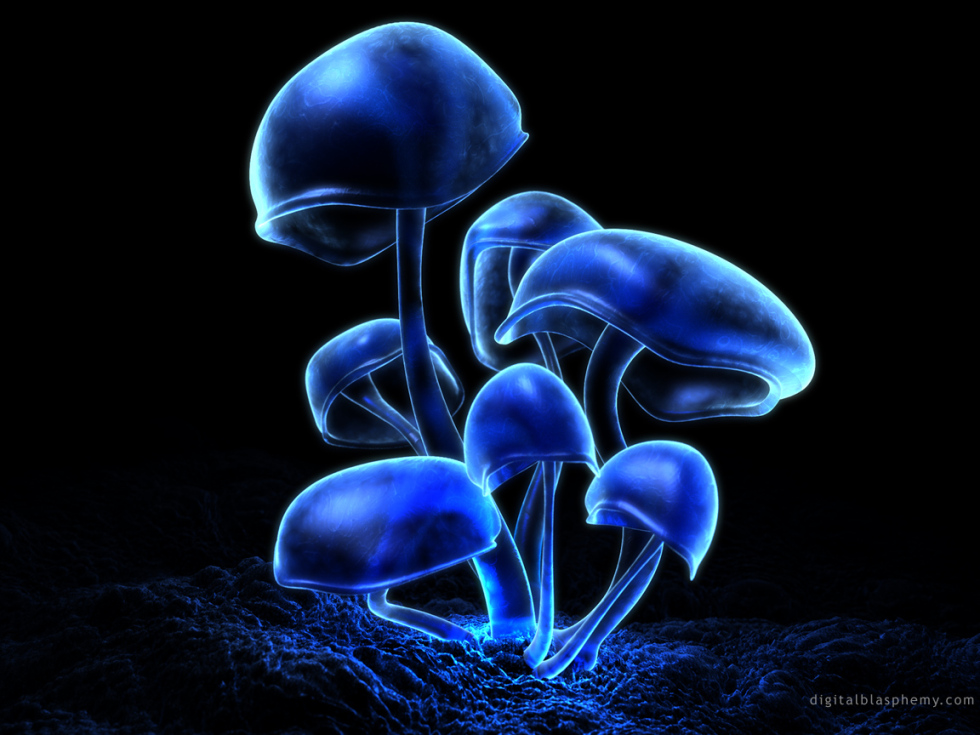 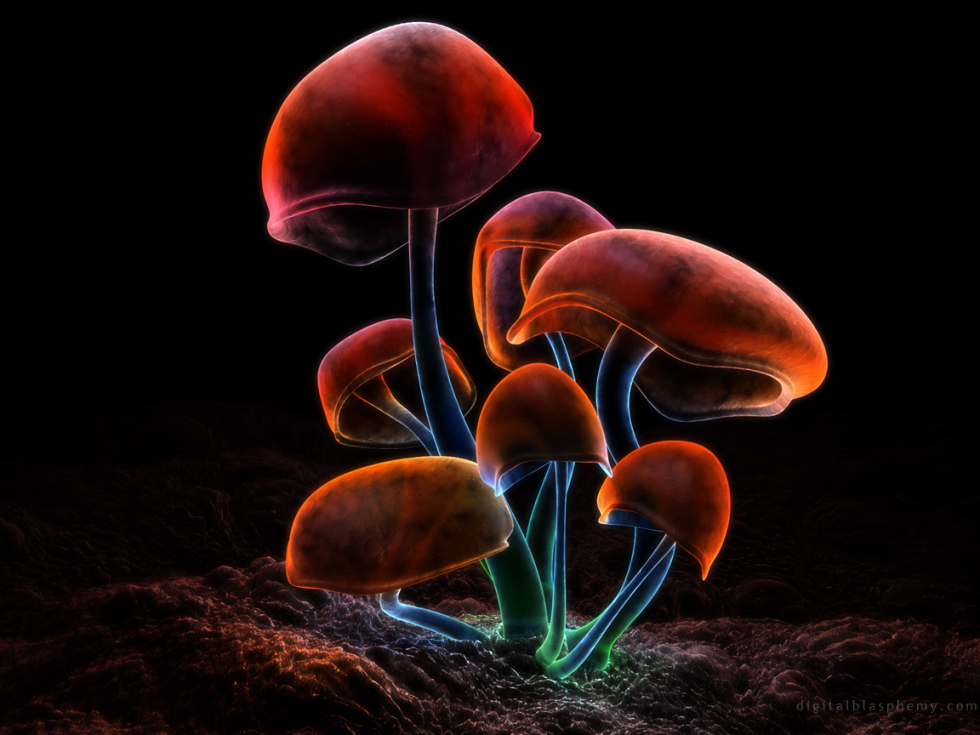 My “Fluorescence” mushrooms are pretty much iconic by now (at least within the niche of “wallpaper aficionados”) but their purpose for me has always been something akin to the teapot model that comes with Lightwave.


Basically it’s a prop on which to display different textures. Here I am experimenting with distance gradients and sub-surface lighting. I also wanted to upgrade the terrain with something a little more hi-res and bump up the radiosity lighting so the mushrooms themselves appear to be casting all of the light. 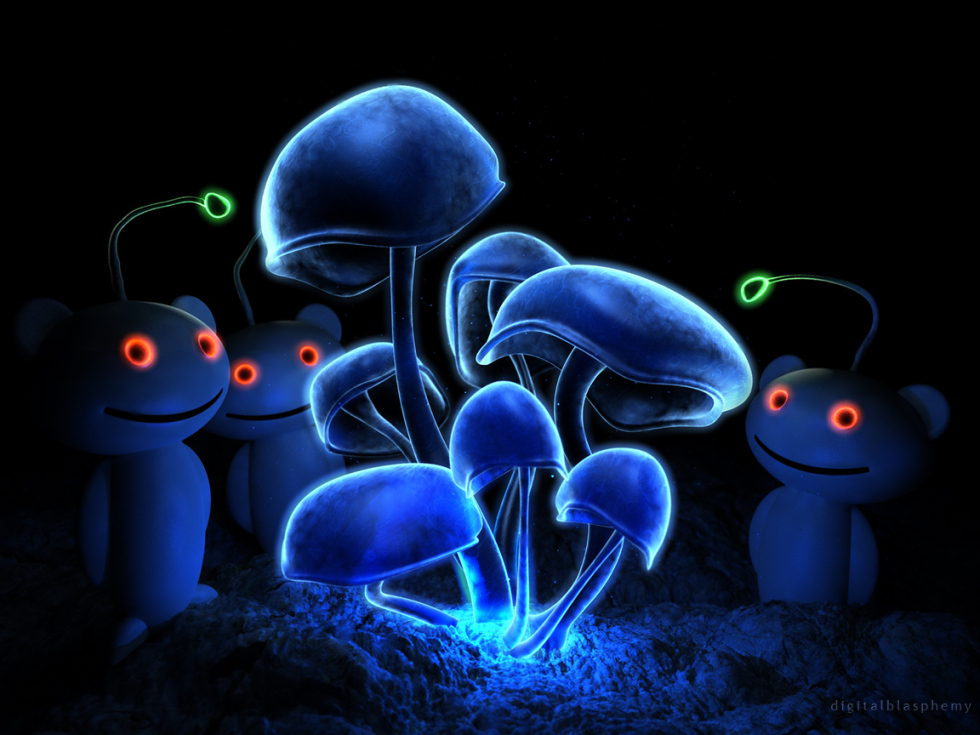 On December 2nd I was sitting and waiting for a render to finish
which I decided it would be fun to do an “IAMA” (Ask me Anything)
on Reddit.com. Redditor
“poker_face” asked if I could “draw” a Reddit Alien (TM). My
answer was “We’ll See”, which was taken to mean no.


As my kids know, “We’ll See” can sometimes mean yes. I
had a such a nice visit with the Reddit community that I thought
it was the least I could do to try my hand that the iconic Alien.


Most Redditors seemed to know me from my “Fluorescence” mushrooms
so I thought it would be fun to combine the two. Especially since
my Christmas render is still churning. I roughed this out
and rendered it on my third-string workstation using Lightwave
10.

This one is dedicated specifically to Redditor “Rethread”.
As requested: Something “warm and fuzzy” for the Redditors.

DB is not going dark today, though I do stand with the rest of
the Internet in calling for the defeat of SOPA/PIPA. I make my
living off of my creative work and I have seen it pirated in
just
about every way imaginable. Still, I would rather endure that
than give the government carte blanche to shut down sites
without
due process.

Rather than darken my whole site I have turned off my
“Fluorescence” mushrooms for the day on my home
page. Members can download the
wallpaper from the links above.

Wikipedia has a great resource for contacting your elected
officials and showing your displeasure with SOPA/PIPA at
http:/
/en.wikipedia.org/wiki/Special:CongressLookup.

I was curious as to how my “Fluorescence” mushrooms would look with
only back lighting. Not sure if this one deserves its own place
in my gallery or not, but I think it makes a nice wallpaper
nonetheless.

So many folks have requested a green Fluorescence for St. Paddy’s day. Why haven’t I done it before? Good question. I just remembered because I wanted to use a green version of “Fluorescence” for my Facebook Page Profile Pic but saw to my chagrin that I didn’t have one!


Rather than simply shift the hue of the blue version using Photoshop I chose to re-shade and re-render the mushrooms using “shamrock green” (#009E60). Since I went to all that trouble I thought I should probably post the wallpaper for my Members 😉

Hard to believe that it’s been 20 years since I posted what will probably always be my most famous render. I thought it would be fun to mark the occasion with a special Christmas version. The idea came to me as I was exploring Blender and discovered its very useful “Real Snow” addon which I then used to add snow atop my mushrooms.

I hope you enjoy it and have a wonderful holiday!